A FORTUITOUS ACCIDENT - HOW VIX STARTED

In February of 2019, my own ski nearly killed me. I was racing GS on an unassuming hill in New York State called West Mountain. Everything about the day was typical: average temperatures, forgiving snow, and certainly not the sharpest skis I'd raced on that season, or probably even that week. I skied the first 10 gates as well as I could have hoped for but made a slight mistake coming off of the headwall, which pulled my line low coming onto the flats. I lost some speed, let out a frustrated grunt, and dropped into a tuck in a futile attempt to make up a few tenths on the flats. I couldn't have been going more than 25 MPH.

Four turns into the flats, I felt like I was crawling towards the upcoming break-over, and I was anxious to reach it in order to regain speed. Impatiently, I rushed the transition coming into the next left-footer and got hung up on my inside ski. The outside ski hit some chatter on the track and popped off, gliding a few yards ahead of me before hitting a pile of soft snow and coming to a stop on its side. I tried to ride out the turn on one ski but, off-balance, I began falling inwards and toward the resting ski. I want to emphasize just how unassuming this "crash" was. I've always relied on brute force to make up for what I lack in technical prowess. This approach worked for me on occasion, but for the most part just resulted in a disproportionate number of DNFs. (I'm sure every race team has a kid like me — you know the type.) As a result, I've had my fair share of spectacular falls, the videos of which I've taken great pride in (again, you know the type). But this was nothing like that. I would venture to say this may have been one of my top-10 lamest and most uninteresting falls — although the result was anything but.

My momentum carried my body toward my resting ski and then over and across it. I immediately assumed that I had hit my head rather hard because my field of vision was overcome by a bright red haze. Although I didn't feel any immediate pain, my edge had cut my left thigh all the way down to the femur. It felt like someone had inserted an industrial vacuum inside my leg, and I can only recall the feeling of having the life sucked out of me through my wound. My leg was splayed open so wide that it looked alien to me — it took a few moments to register the grave reality of my situation. Once it clicked, I frantically screamed for help, and everything that came after that is a blur.

Luckily I had fallen in a spot on the course where most bystanders were gathered to watch. My limp body slid right up to the feet of my childhood coach Kurt Mackie, who immediately jumped to my aid and began applying pressure. His daughter Kylie sprinted over and fashioned a makeshift tourniquet from her windbreaker. One coach tied her belt tightly around my thigh and UConn coach Bruce Diamond quickly applied the tourniquet he'd received at a Stop The Bleed seminar just a few days earlier. A crowd gathered around and those who knew what to do quickly came to my aid, while dozens of others stood helplessly, dumbfounded.

I kept cracking jokes to dispel the eerie tension of the silent crowd around me. But my forced humor fizzled out as I saw the blood keep pouring out of me with no sign of slowing. Ski patroller Bruce Gelles recalls me asking if I'd keep my leg, and then a few moments later asking if I was going to die. I remember the answers to both questions, and neither was very confidence-inspiring. That was the first moment in my life where I felt truly helpless. I let my head fall back onto the snow and let fate take its course, whatever that may be. I remember sitting in my hospital bed that night, stitched and stapled shut, trying to make sense of the day in a painkiller-induced haze. I was overcome with a sense of gratitude and fortune, but I couldn't shake this incessant feeling of frustration: Why wasn't I aware of this risk? Why didn't I know anything about ski lacerations, whereas I had considered just about every other possible injury in this sport? The frustration stemmed from the fact that this had happened to me before, albeit less severely. lust 3 inches lower on the same thigh, I had a scar from when my ski nicked my IT band during early-season training in Vail in 2014. The difference was, then, I got back to training four days after that accident, so I let myself forget about it entirely. That is until the surgeon asked me about the second scar on my thigh.

WHEN LIFE GIVES YOU LACERATIONS...

I began doing some research on these injuries the following day. It felt like an entirely self-serving pursuit as I could only think of three other instances of the
accident: two skiers from GMVS and Bode Miller’ infamous cut on the last run of his career in 2015. It wasn't nearly common enough to make a fuss about (or at least, so I figured).

Since my accident, I've devoted myself to developing an understanding and remedy for ki lacerations. Through what little data is available, I learned that these injuries have been quite common since at least the 1970s (with certain studies attributing nearly 10% ofall sk injuries, recreational and otherwise, to ski lacerations). I also realized what I perceived to be a massive shortcoming in cut-resistant fabric testing.

I built 22 iterations of my own testing device, procured 220+ fabric samples after reaching out to every technical textile manufacturer I could find, and tested each one. Eight of them worked sufficiently well and three tested exceptionally, but the vast majority hardly worked against a ski edge at all.

I used the results I gathered to co-develop a cut-resistant fabric that had to exceed one very demanding standard: It had to perform well enough and inspire enough confidence within me to overcome my psychological barriers and enable me to return to ski racing. I managed to make just that, had it hastily stitched into a pair of leggings, and I found myself back on the snow for the first time last December. In fact, on my first day in slalom gates I nearly got cut again. My edge cut through my pants, suit, and the thick foam liner of my boot but stopped at the leggings I'd made myself. This was the moment that transformed my outlook. For the first ten months, all of my efforts had been entirely self-serving and focused on my return to skiing. Now I felt compelled to resolve this issue for the sake of the greater ski community, and that began with making them aware of it in the first
place.

THUNDER CAN (AND DOES) STRIKE TWICE - WITH A VENGEANCE

After my first cut in Vail, thought my injury was a rare exception. After the second cut at West Mountain, I considered myself a rockstar of the most unfortunate variety. But after the third narrowly.
avoided cut, I was convinced that this had to be a larger issue within our sport. The more people I spoke to, the more my suspicions were confirmed.

Everyone I asked seemed to know at least a few people who had been cut, although the details were always hazy. As the 2019-20 season progressed, I kept hearing about more cases, Then I started getting calls from athletes, coaches, and parents who either got cut, tended to lacerations, or nearly lost a loved one to the injury. did what little I could: I sympathized with them, I tried to provide whatever information I had collected, I encouraged people to attend Stop the Bleed seminars, and suggested they wear cut-resistant gear and carry tourniquets. By January I was getting these calls on a weekly, and then near-daily basis.

People were waking up to the reality of the risk, but far too slowly. I worried that it would take a death for the community to pay ski lacerations the respect they deserved, and I was convinced that a death was imminent; I dreaded the prospect of receiving that call. ll admit that I even felt a slight sense of relief at the premature closing of this season, as I worried that spring skiing conditions would invariably lead to more lacerations, and
potentially the lethal laceration that I was bracing myself for.

This past season was plagued by ski lacerations and made it clear that the injury does not discriminate. I received a heartwrenching message from the parent of a 13 year-old who nearly lost his life and i still regaining full function of his leg. My coach from GMVS, Jeremy ‘Worm’  Transue, personally tended to three laceration events, and at least four students that | attended GMVS with sustained serious lacerations (a lot fora school of 130). There were several high-profile accidents on the college circuit and USSA races alike just this year, and many of the skiers were wearing protective garments at the time of their accident. I even got a message from Swiss World Cup superstar Loic Meillard, who'd badly cut his calf freeskiing powder in Japan.

And then there was my conversation with Bode just a few days ago. I'll let him speak for himself:

“I started skiing when | was two (years old) in 1979 and have skied every year since then. Over that time | have been cut by my skis or bindings in the neighborhood of 60 times, some more severe
and some less,”  Miller said

“I ended my racing career in 2015 after a crash in the super G at the World Championships in Vail where | was cut by my ski,” Miller went on to say. “During the crash, as | was tumbling, my ski cut my calf and hamstring tendon, stopping just short of cutting my artery behind my right knee. This crash was the 14th cut that required significant medical attention, including sewing the tendon back together and closing the
wound with 50 oF so stitches.'

"In my experience, cuts in racing and recreational skiing are fairly common,” Miller concluded. “Because of the general circumstances of skiing, cuts are very dangerous. Remote locations, slow response times and high heart rates all combine to compound the risks of cuts in skiing. It needs to be a priority in the industry to change rules about fabric and construction of race suits and ski clothing to prevent cuts.” 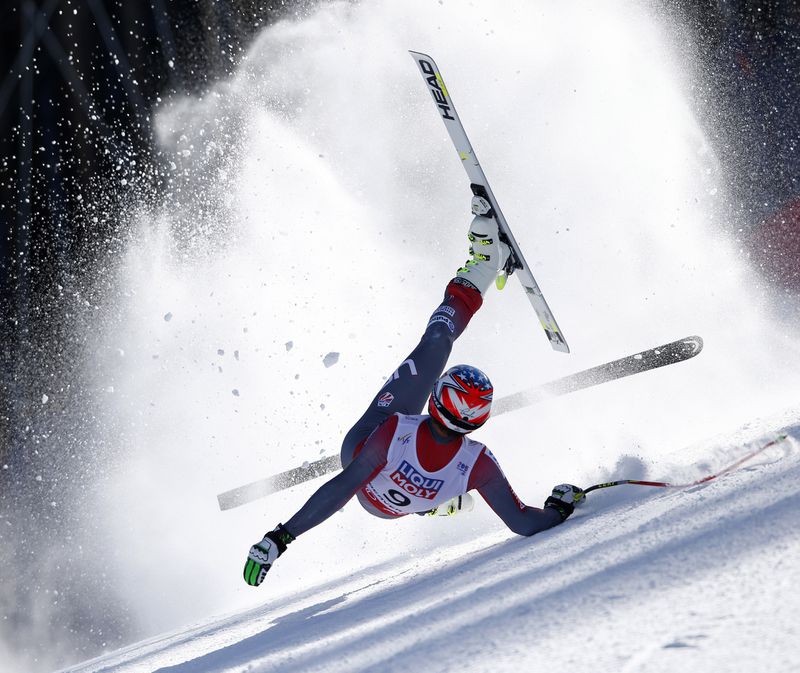 You read that correctly, approximately 60 lacerations with 14 of them requiring serious medical intervention. My two-and-a-half incidents pale in comparison, and | have no doubt that there are many more people out there who have cut themselves far more times than | have, Ski lacerations are not torn ACLs, broken bones, or concussions — I'd argue that they pose a more direct threat to both our sport and our athletes’ lives.
The good news — and few would dispute this — is lacerations are far easier to mitigate than any of the above injuries, and I've grown to believe that we might even be able to eliminate them entirely. The tools are there, we just need to make proper use of them.